Skip to content
Homepage AND IN THE REGIONS? Belgium The Creation in Belgium of a Collective of Practitioners of the Speech Act 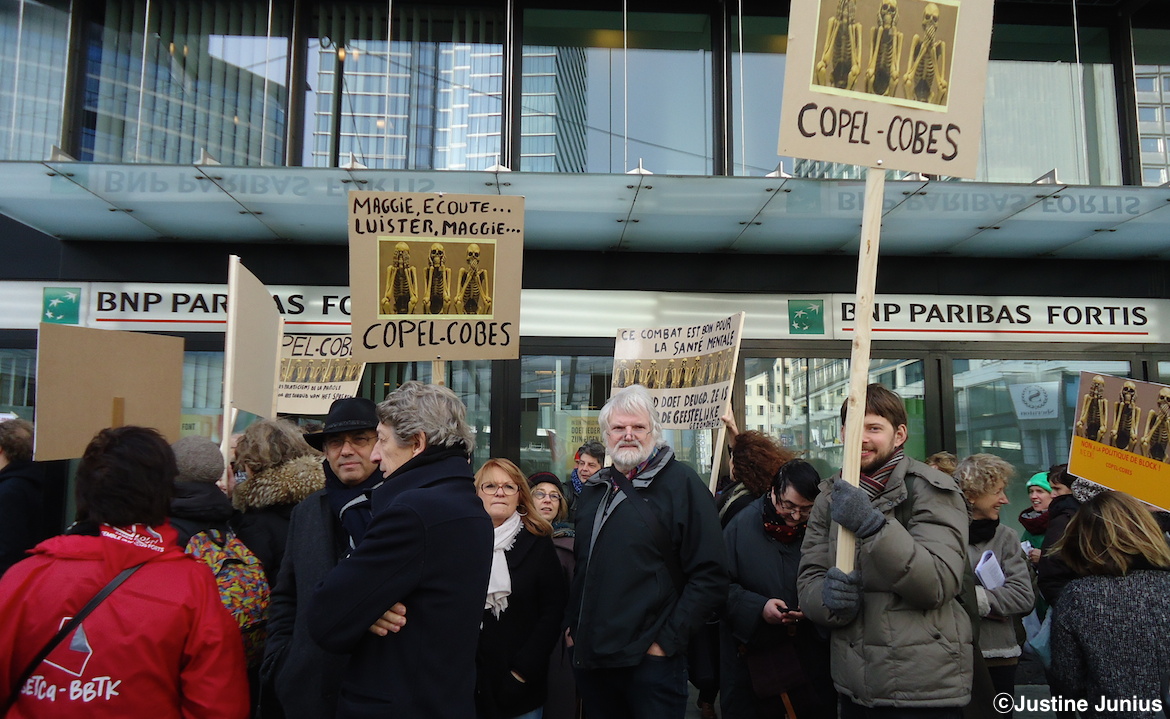 In what context did this Belgian Law concerning mental health care professions, instituted by Maggie De Block (Minister for Social Affairs and Public Health) in July 2016, come about?

The context is first of all discursive. What we nominate as the fall of the father has had two kinds of return. On the one hand a return of the fundamentalist father, who wants to bring all of the incoherencies inherent to human life to the stage, and on the other hand the delirious discourse of science, which would have us believe that everything can be explained using numbers. It is this discourse which has as its fundament a determination to submit the “mental” to Evidence Based Medicine, as if one could measure the discontents of the parlêtre in the same manner as one measures blood sugar levels. Dare I say that fundamentalism is the truth of evaluative scientism? There, I’ve said it.

It is not only in Belgium that this discourse is being propagated. In France, a draft resolution, signed by 93 deputies will be tabled in December. This resolution seeks the condemnation and interdiction of psychoanalysis with regard to the treatment of autism. Why condemnation? What is this moral connotation which is introduced in this document? The fact is that the insubordination of the autistic pushes the stupidity of the Master to its limit, and the fact that psychoanalysis listens to this subject uncovers the subversive relief of that psychoanalysis offers.

This reading of the malaise of the discourse(s) of our contemporary world allows us to understand what happened between the law on mental health professions voted on in 2014 under the mandate of the former Minister for Health, Laurette Onkelinx, and this recent Law of Maggie De Block’s in 2016, the one against which we are fighting. The first law took into consideration the complexity of the area and did not seek to reign in the diversity of the field of the psychotherapies under One single behaviourist and scientist orientation. I think that the 2016 law is a response to the one of 2014. This response is all the fiercer as it attacks a certain liberty as recognised by the 2014 law, in very much the same manner as the fundamentalist war is a response to sexual liberty. It is in this sense that Maggie De Block’s law is a fundamentalist law. 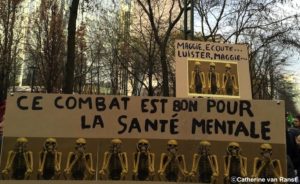 What are the dangers here for both the patients and the mental health professionals?

The mental health practitioners who consider that transference and speech are the fundaments of any psy cure constitute the greater majority of those working in the field. Have you ever met a CBT Clinician? Me either. There are not very many who subscribe to that ethic and who are prepared to submit to the exigencies of being evidenced based! However, there is no guarantee that this will continue to be the case. If this law is not repealed, if it is successful in application, then in the long term the practitioners of the speech act, whether their orientation is humanist, systemic or psychoanalytic, will progressively disappear from the public sector because institutions will not engage them. Their practice will be deemed “non-compliant” and they will not be eligible for payments. They will no longer be involved in mental health services or hospitals. This will certainly have repercussions in the liberal (arts) field. The young will submit to these exigencies very simply to earn a living. Little by little the communities of practitioners whose work is speech based will disappear. This is already the case in countries such as Austria and Germany. Laws which resemble Maggie De Block’s have been in force in the UK and Netherlands for many years.

And with regard to the patients, the danger is that they will no longer be able to benefit from adequate care. The primary objective of this law is not to reduce suffering, but to get those who are suffering back to work. The legislator does not hide the motivation that, by this law, savings would be made. It begins with an observation of the existence of absenteeism and a lack of productivity at work, and from there attributes these things to “slight” mental difficulties in a large part of the population. Those who suffer with these slight troubles will only be reimbursed for five sessions and will be then obliged to return to work. They will be left to their “little” existential questions, and quite likely this experience will discourage them from ever again coming to speak. 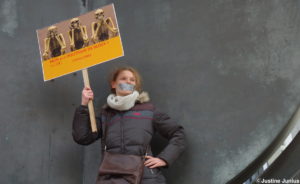 The COPEL – COBES, collective of practitioners of the speech act which was created in Belgium following the enactment of this law. What is their fight?

The context within which we find ourselves is not corporate. As I have said a little earlier it is discursive. As such this is a war between two discourses which no mediation can reconcile. The COPEL – COBES began from an observation that the greater majority of those who work in the field of mental health are opposed to Maggie De Block’s law. We felt it necessary to create a place from where the voice of this majority of workers could be heard. This is the primary objective of COPEL – COBES. The decision to create the “place from where” was taken at a meeting attended by 200 people, held in a Centre Médico Psychologique in Brussels on the 21st October.

Since then an electronic mailing list has been set up and as of today 600 people have signed up. The list sends out one text each day, an expression of the voice of the workers in the field of mental health. Also it is a vehicle for information with regard to the progress of the application of this law. Little funny videos appear as well each day, a way of keeping up morale. A way of keeping up morale in the face of the death drive inherent in De Block’s law, these videos testify to the contrary, to the vivacity of speech.

Last week we organised a demonstration against Maggie De Blocks mental health reforms. In which between fifteen and twenty thousand people participated. We appealed to the readers of COBEL – COBES to lend their voices to this demonstration, there was a great presence of very visible banners which attracted a lot of interest, notably from the media.

The struggle is far from over. There is much more to come. We have all sort of resistance projects planned. You will see these in the coming months. We want the complete repeal of this legislation. We won’t take less. 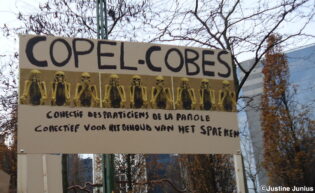 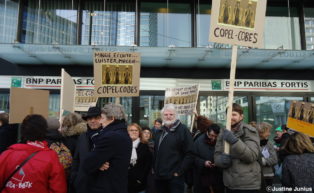 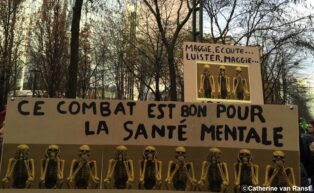 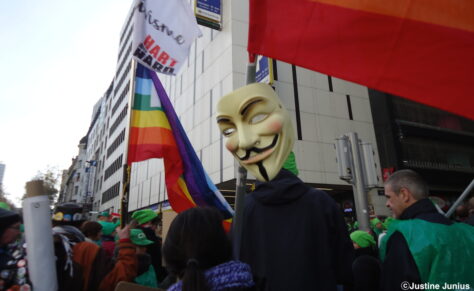 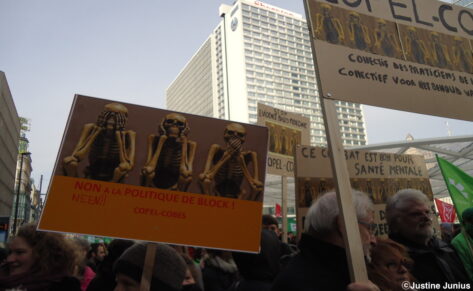 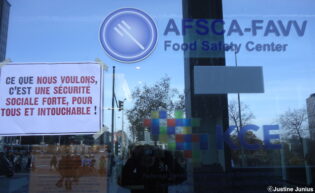 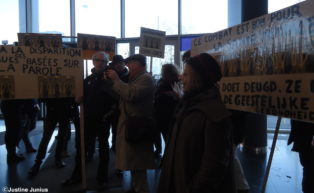 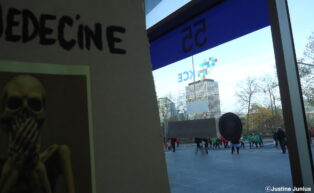 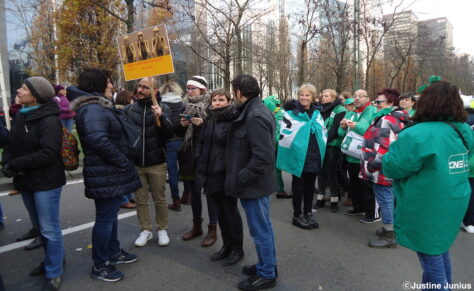 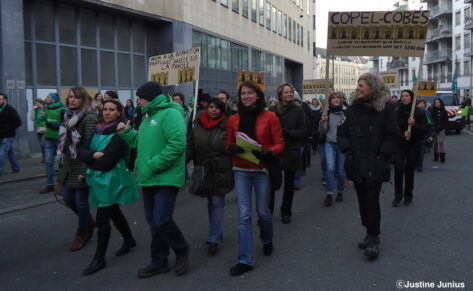 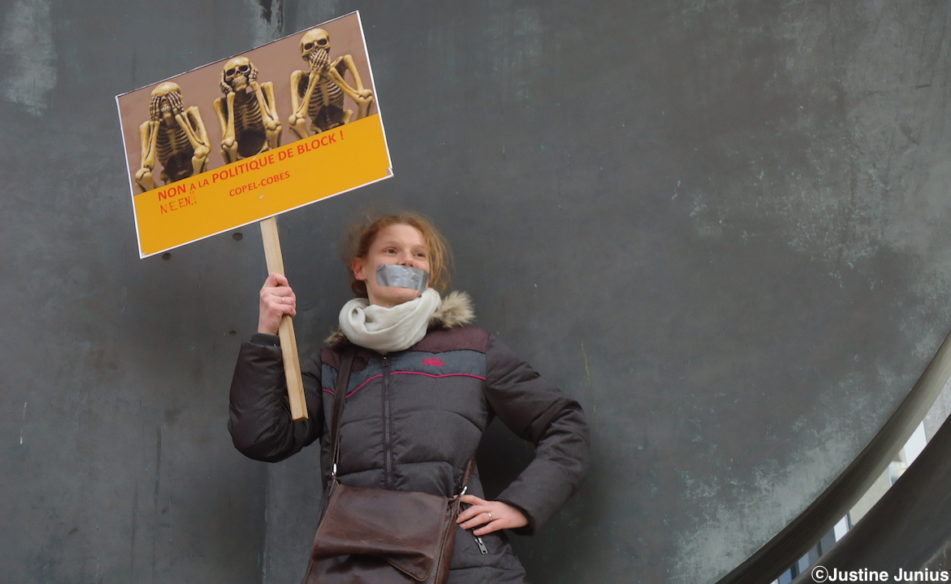