Skip to content
Homepage Featured THE “WORLD IN THE SINGULAR” EXHIBITION

THE “WORLD IN THE SINGULAR” EXHIBITION

At the PIPOL 8 Congress you will have the opportunity to see a small part of an exhibition which brings together creations by people who suffer from autism. The exhibition is at one and the same time both singular and plural.

Singular because TEAdir-Aragon had the idea to make it a travelling exhibition. From Saragossa to Brussels via Venice, Bilbao, Huesca, Tournai and Lille, this exhibition has attracted works from the various places already visited. At the moment, more than 6,000 people have seen it.

Its plurality stems from the multiplication of its effects: in the young artists, in their families, in the cities and the citizens that come to partake in the exhibition, in the colleagues motivated to put in to play their desire so that the exhibition can be an open, generous possibility. The exhibition creates bonds in every stop of its tour. In every place there are activities that lovingly show the psychoanalytic orientation and its work with autism.

The exhibition “The World in the Singular” emerged as an idea from the families of TEAdir-Aragón. In May 2015 the original exhibition was presented in Zaragoza, demonstrating the work of three young artists with autism: Martín Gimenez Laborda (Zaragoza), Lucile Notin-Bourdeau (Avignon) y Carlos David Illescas Vacas (Granada). The result was beautiful and surprising. The exhibition strengthened the ties with the LaMaO, an association of families that provide us with their support and work. Dignity and respect have been two signifiers that have oriented us since the beginning of our project. A third has since been added: “encounter”. An encounter that launches desire, that allows us to glimpse a horizon, that permits the exhibition to become something different in every stop of its route. That is how “The World in the Singular” produces multiplying effects.

The world is singular for each and every one of us. This is what the different artists show. Their art surprises us because it is an anchor in the mirage of the everyday world we inhabit. It awakens us with its unique style, in which the power of colour, the perfection of drafting, the mix of bodies, the construction of a world, the sound that tears the canvas, the profusion of details or the delicateness of a stroke communicate to us a singular world. Without a doubt, there is something to say about those with autism. This exhibition is a way of listening; those works of art have something to tell us. 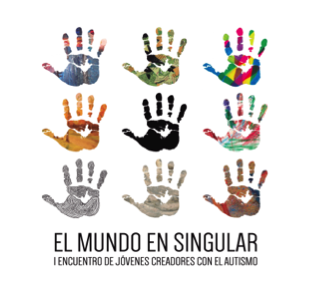